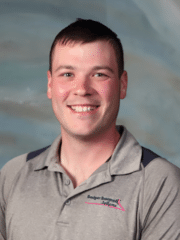 Jesse started with Badger Basement Systems in 2013.  Having been in the construction industry, he was very knowledgeable about what needs to be done and how to do it.  He was very quickly moved from installer to co-foreman.  Jesse is also very personable and really enjoys speaking with homeowners.

Jesse not only can help with water problems but foundation issues as well.  He has helped to install many piers and wall anchors making homes more stable and level, which takes a special talent.   Not only is he an asset to our company, he enjoys that work that he does and takes pride in it.

Jesse has been in the National Guard for over 6 years and is also a fire fighter for the Fort Atkinson Fire Dept.  In what free time he has left, he enjoys hunting, fishing, camping and just being outdoors.

Customer Reviews
About Me
View all Reviews
Testimonials
from customers I've helped!
View all Testimonials
Before and after photos from jobs I've worked on:
Back to Previous Page Back to Meet The Team