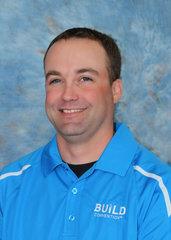 Jim has had extensive training at Basement Systems in Connecticut. Jim began with the company as an installer and was promoted to a Co-Foreman, then continued on to become a Foreman.

Having installed several of systems with his own hands, Jim has a genuine understanding of water problems and the solutions to them. He takes responsibility for every job he is involved with and is a trusted member of the Badger Basement Systems team. Since 1999, when Jim started with Badger Basement Systems, he has successfully helped many homeowners with their basement water problems.

Jim enjoys meeting homeowners and helping them solve foundation and basement water problems, enabling them to get more out of their homes. In his free time, Jim enjoys doing anything outdoors. He has lived in Wyoming, North Dakota, and Michigan, as well as living in Wisconsin, and likes to see new things.

Customer Reviews
About Me
View all Reviews
Testimonials
from customers I've helped!
View all Testimonials

Back to Previous Page Back to Meet The Team